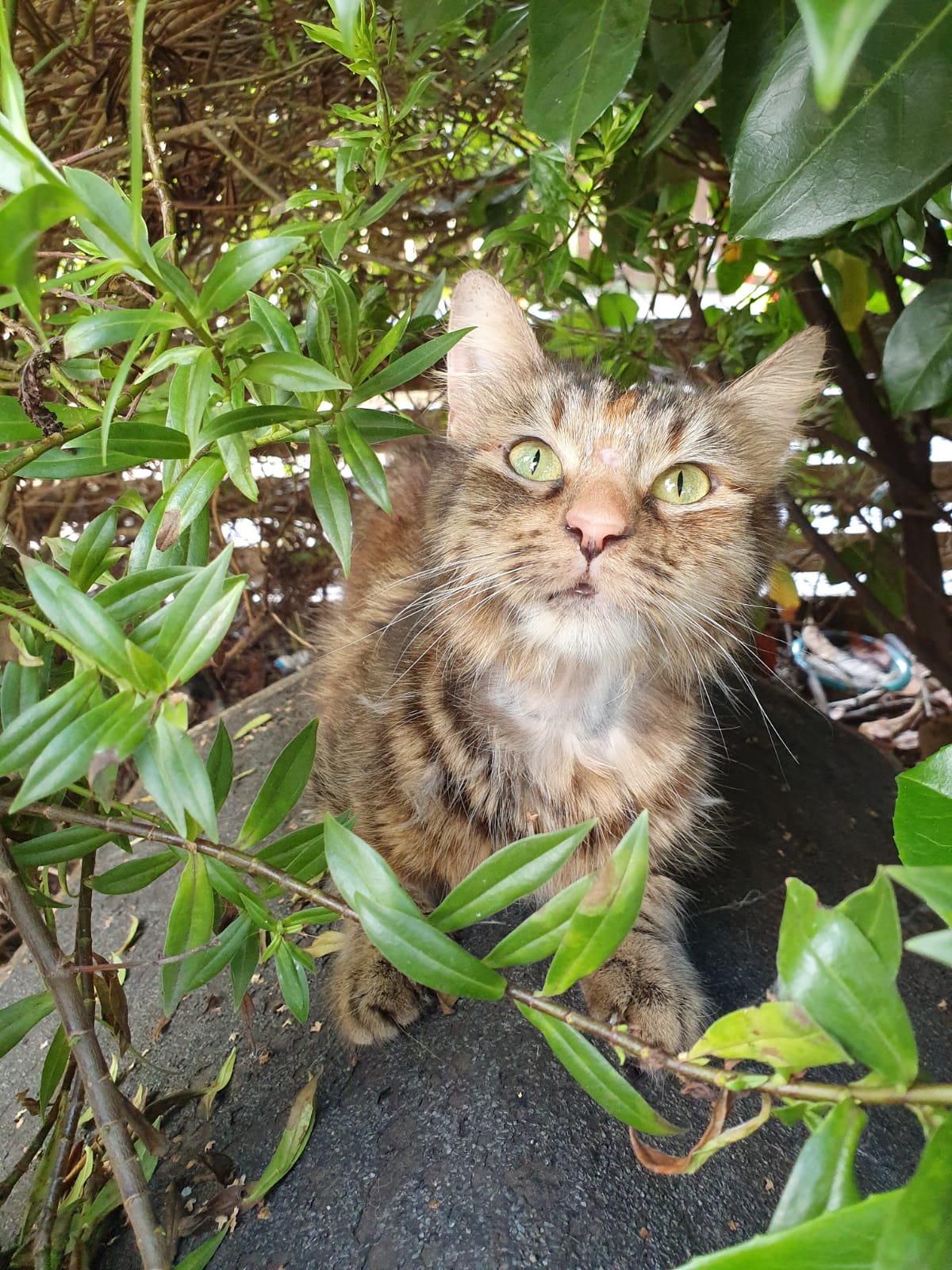 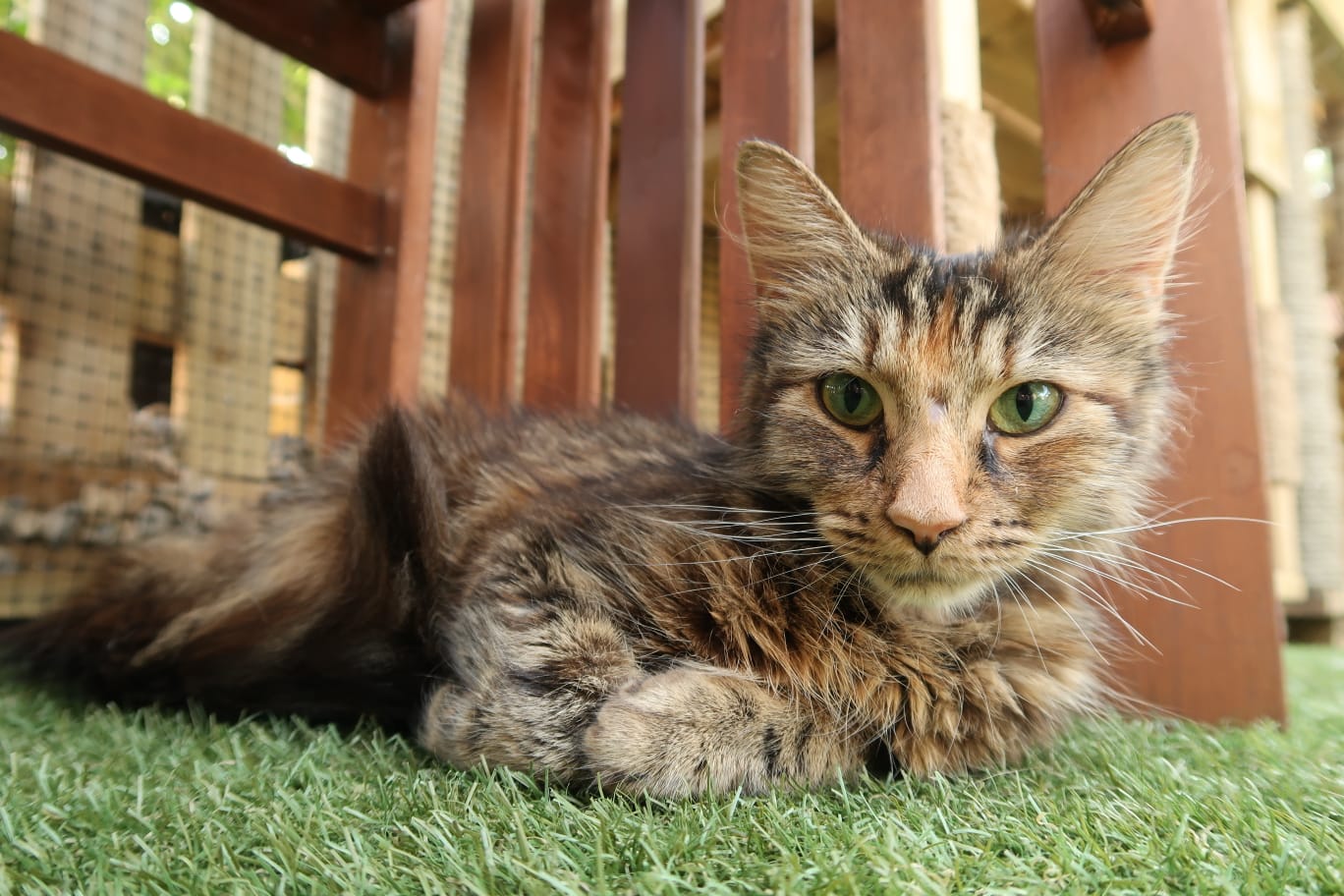 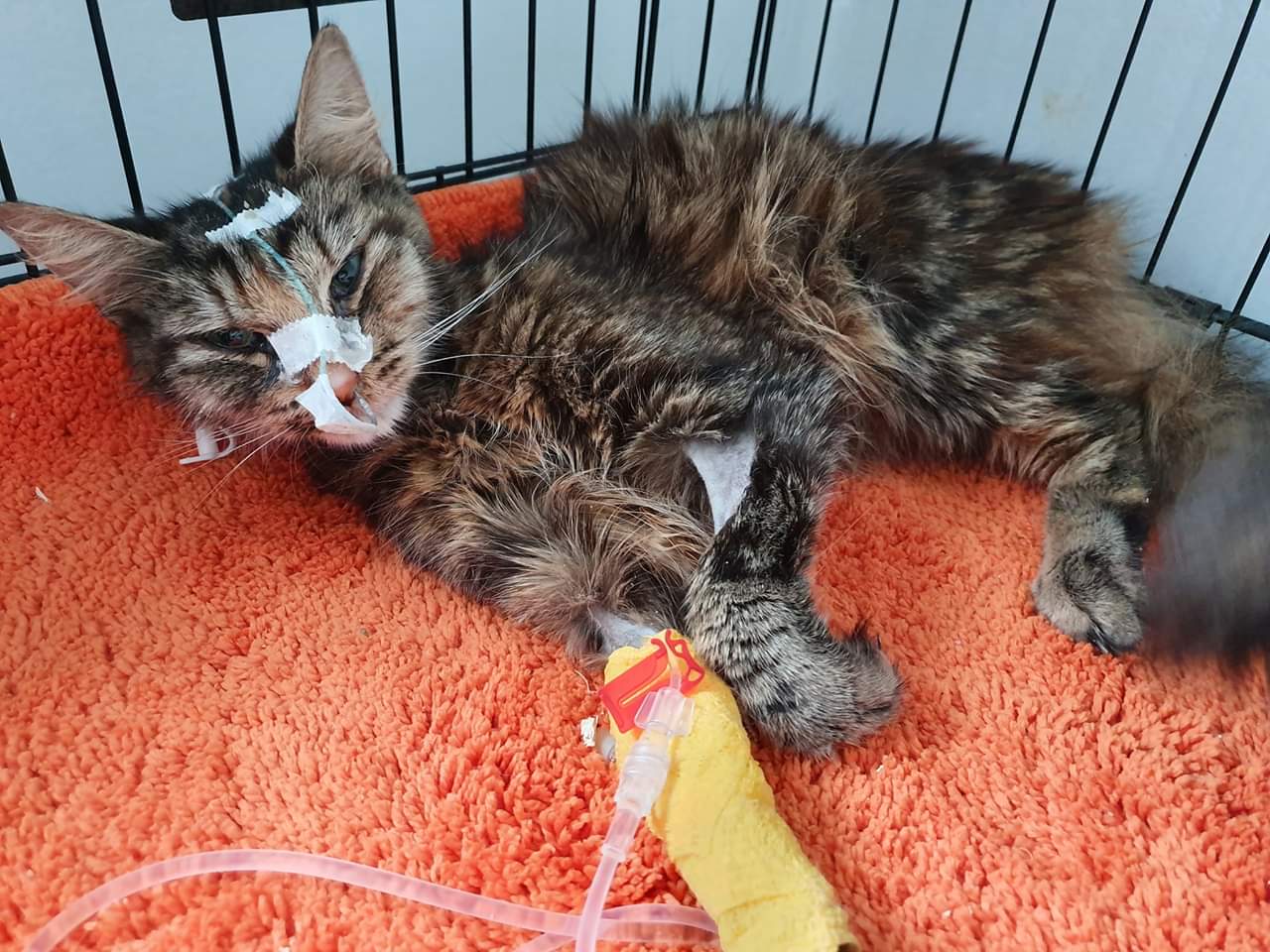 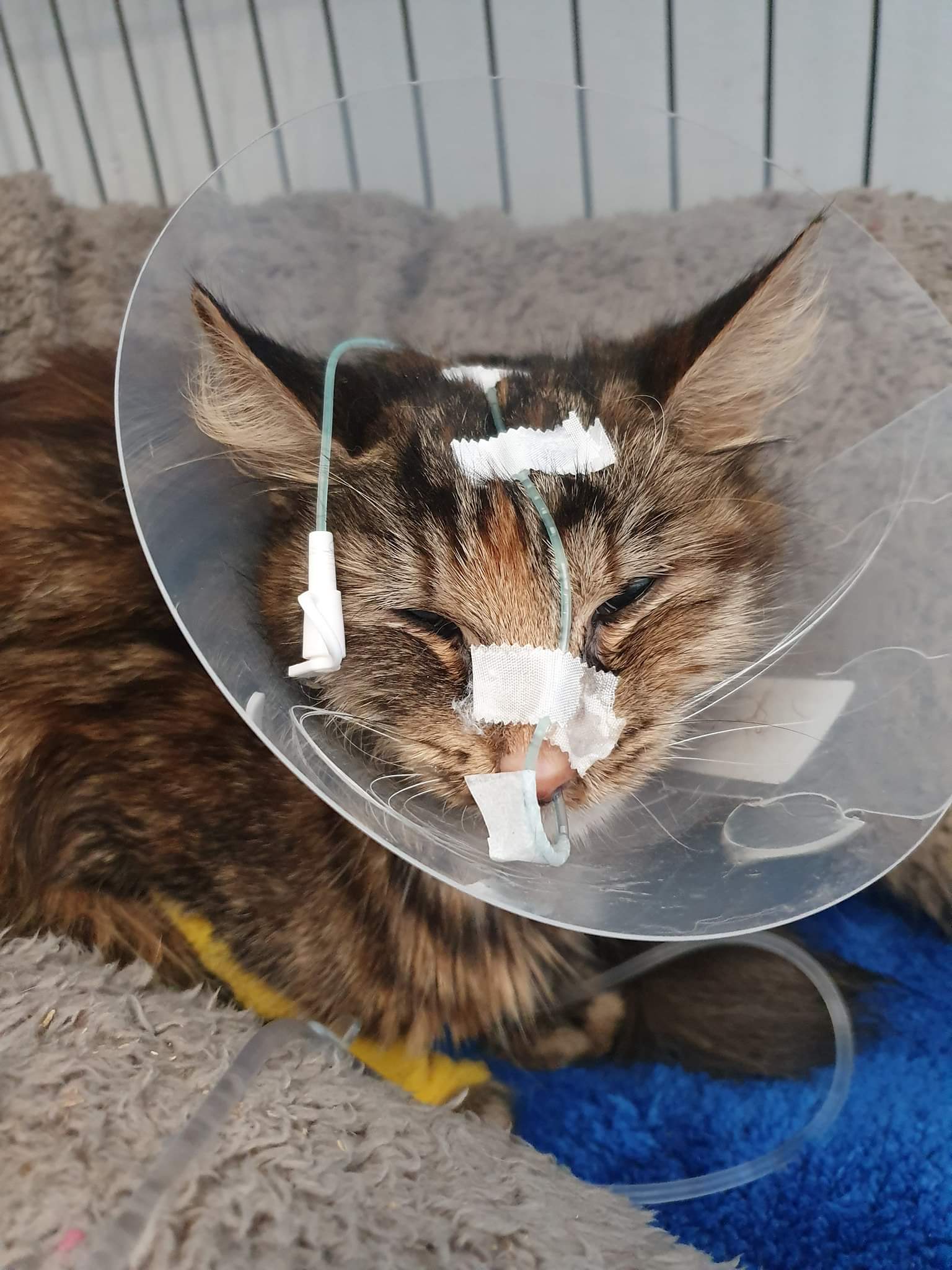 This is Boudicca. She is one of the saddest rescues we have ever been involved with. I simply cannot imagine somebody, having nobody to miss them. I have invested more time and energy to this beautiful cat than any other we have ever had in the rescue.

In June 2019 she was brought to us by West Yorkshire Police. They called us in desperation after the discovery of a deceased body in a flat and they believed he had died in April. Boudicca had been stuck in the flat with her deceased owner throughout this time period. On arrival at the rescue she was horrendously malnourished, underweight, fatigued, anaemic and as anyone can imagine, quite confused. She was rushed to the vets to have bloods taken and subsequently received intravenous fluids.  She then returned to the rescue and was intensively nursed and cared for by the volunteers. She made it through the night and the next 48 hours showed small signs of improvement.

She enjoyed snuggles with Katie stayed with her every night intensively nursing her and giving her some very need TLC (and let her have snuggles on the sofa at what ever time she wanted). A week on and she continued to improve and continued to enjoy special TLC and was enjoying sunning herself on the office windowsill.

During her journey back to health we also witnessed downturns too. Boudi was put back on intravenous fluids once more at this point after she took a significant turn for the worse in early July 2019 and we had to make big decisions. We discussed all options with our amazing vet at Northcote started blood tests. Whilst the results weren’t brilliant they could have been a lot worse given Boudi’s history.  Boudicca consequently had a Nasal Gastric tube fitted so that we could ensure she was given the best nutritional support possible. This was a huge commitment for volunteers at the rescue and really was the only chance we felt she had. Her 24 hour intensive and supportive care continued. We we can’t stress enough is that during Boud’s journey with us she had been given so much love and snuggles. At times we removed her safety collar for a few moments (whilst under supervision) to allow her a lovely tickle under her chin and around her cheeks. Our rescue volunteers are instrumental in making our rescue care come together. Basics like popping to Ikea to buy a perfect sized table to pop her hospitalization bed on – this not only saved our backs whilst nursing her but gave her more and stimulation. Supporters too were brilliant – their donations of the Royal Canin Recovery Liquid Boudi needed (a special formula specific for enteral feeding) made such a difference. This formula is excellent but does not come cheap at £16 a day cost.

By mid-July she was starting to feel brighter again. At 4 weeks on we were continuing her fight, exhausted but battling on spurred on by her warrior spirit and cheered on by our supporters. It was all worthwhile every time there was a little breakthrough. By 21st July she had gained almost 700g in weight, her energy levels had greatly increased and she had chewed through her IV line – so clearly Boudi had enough of the fluids, she had also pulled out yet another feeding tube too. She was also eventually eating a few biscuits too! I think this was Boudi’s way of telling us she was feeling much better now. I am so proud of Boudi’s determination and warrior spirit. Boudi was however still very much nutritionally deprived and we were still providing critical nutritional support using the Royal Canin Recovery Liquid Diet and we would be continuing this for several weeks to come. Having seen Boudi’s progress, I, for the first time in exactly 31 nights, got into bed as Boudi was finally out of the intensive care stage of her recovery. Boudi was still very much working at a deficit and would have many months recovery ahead of her.

Just under a week later, we were very upset, yet not surprised to see the results of a follow up blood test which revealed significant renal damage and likely pancreatic disease too. Her fight goes on.

She continued to be happy, affectionate and grateful for all the love and support she was receiving and we therefore made a slight change to her care plan. We added medication to support her kidneys, to increase her appetite and has also an anabolic steroid injection to help her all round. The main focus of Boudi’s care is quality of life, function and enrichment.

6 weeks later we hit a milestone: on arrival Boudi weighed just over 1.5kg and on the scales that morning she topped 3kg (3.035kg). By 7 weeks she was enjoying the safety and adventure of our new SENSE garden environment. 8 weeks on saw her bouncing around the SENSE garden, chasing birds and at last being a happy and content cat. Her weight had doubled since arriving at the rescue and her weight is now stable.

On 26th August 2019 we celebrated beautiful Boudicca’s Bank Holiday Cream Tea not only to help raise funds to help pay towards Boudicca’s continued vet bills but to ensure that we came together to share just how amazing and strong our little warrioress is with the support of our vets, volunteers and supporters. Throughout this journey the nutritional, veterinary and medical support we gave her was a financial struggle. We were only able to provide such high care due to the valuable donations of our volunteers and supporters. At around £5,000 in total it makes a big difference to know that supporters like you are out there helping us every step of the way to change the lives of cats like Boudicca.

One Reply to “Boudicca”

This website uses cookies to improve your experience while you navigate through the website. Out of these cookies, the cookies that are categorized as necessary are stored on your browser as they are essential for the working of basic functionalities of the website. We also use third-party cookies that help us analyze and understand how you use this website. These cookies will be stored in your browser only with your consent. You also have the option to opt-out of these cookies. But opting out of some of these cookies may have an effect on your browsing experience.
Necessary Always Enabled
Necessary cookies are absolutely essential for the website to function properly. This category only includes cookies that ensures basic functionalities and security features of the website. These cookies do not store any personal information.
Non-necessary
Any cookies that may not be particularly necessary for the website to function and is used specifically to collect user personal data via analytics, ads, other embedded contents are termed as non-necessary cookies. It is mandatory to procure user consent prior to running these cookies on your website.
SAVE & ACCEPT